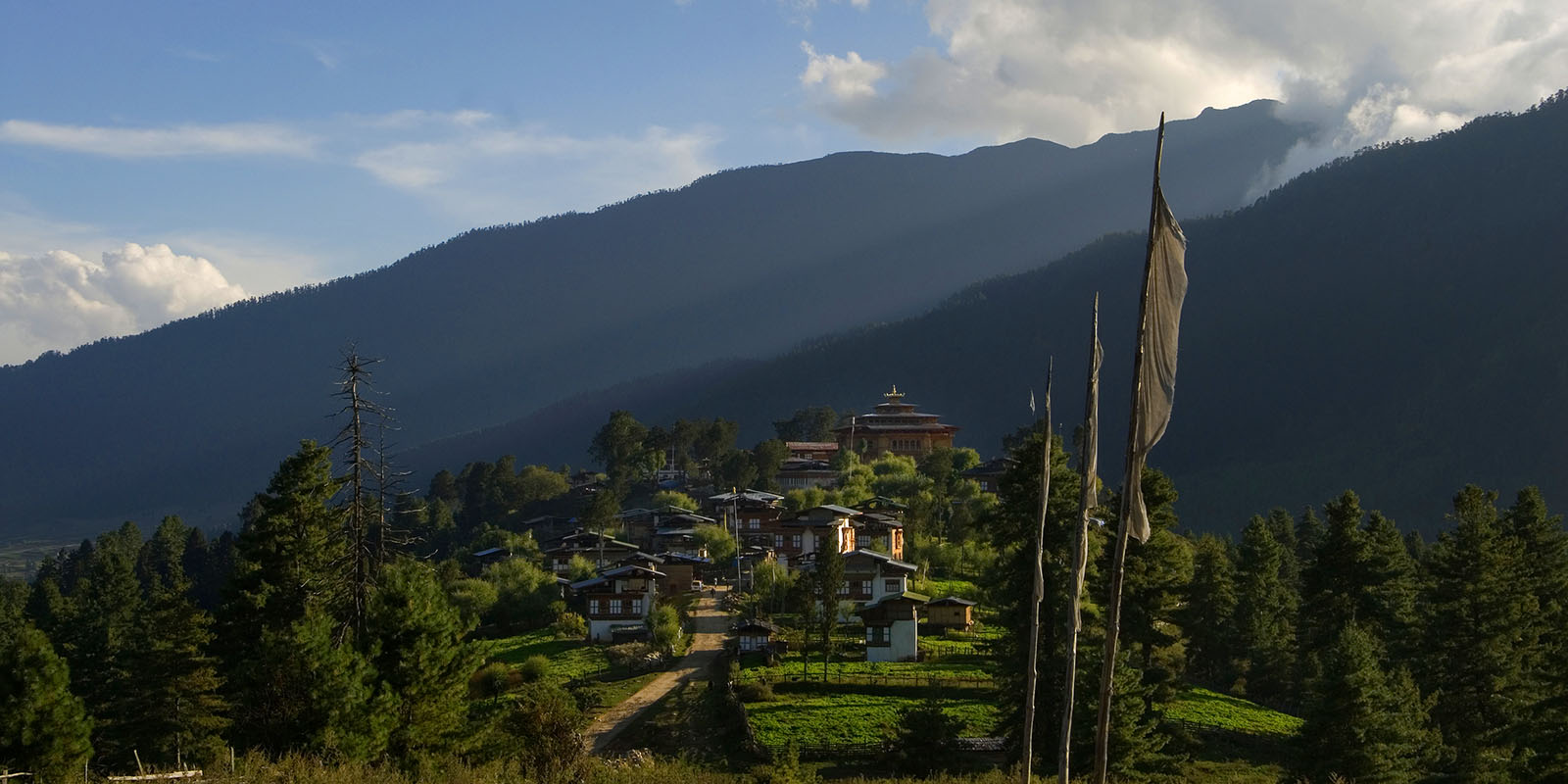 Best times to visit are in Spring from March to the start of May when the rhododendrons and spring flowers are in full bloom and in the Autumn from the end of September to the end of November. The best time to see the cranes is from November to March. 11 days Combine the unique scenery, culture and World Heritage Sites of Nepal and Bhutan with ample opportunity to see some of the many hundreds of native and migratory bird species, amidst stunning natural beauty and protected conservation areas. With expert local guides, you’ll visit travel through fertile valleys and woodlands, scenic villages and protected conservation areas to prime bird and animal habitats including a visit to Gangtey Valley, home of the rare Black-Necked Cranes. Experience gentle day treks, scenic drives and sightseeing in Nepal and Bhutan. Land only price per person (join in Kathmandu). Luxury hotel Kathmandu. Local hotels and lodges in Bhutan. Guaranteed to run for a minimum of 2 persons. Private trips for individuals or groups also available on request.

In clear weather, Druk Air’s flight to Bhutan provides a wonderful view of Himalayan scenery. Whether flying along the Himalayan range from Kathmandu or over the foothills from Kolkatta, it is a fascinating journey, culminating in an exciting descent past forested hills into the Kingdom. On arrival at Paro airport, you will be met by our representative and after a drive of one and a half hour duration, reach Thimphu, the modern capital town of Bhutan. The seat of government, religion and commerce, Thimphu has been capital of Bhutan since 1955. Overnight at the hotel in Thimphu.

After breakfast, sightseeing in Thimphu valley including visit to the following : the National Library, housing an extensive collection of priceless Buddhist manuscripts; the Institute for Zorig Chusum (commonly known as the Painting School or Arts & Crafts School) where students undergo a 6-year training course in Bhutan’s 13 traditional arts and crafts. Later visit Textile and Folk Heritage Museum, a fascinating testimony of the Bhutanese material culture and living traditions. After lunch, visit King’s Memorial Chorten continuously circumambulated by people, murmuring mantras and spinning their prayer wheels. Construction of this landmark was the idea of Bhutan’s third king, His Majesty Jigme Dorji Wangchuk (“the father of modern Bhutan”) who has wished to erect monument to world peace and prosperity. Completed in 1974 after his untimely death, it serves both as a memorial to the Late King and as a monument to peace. Then visit Changangkha Lhakhang, an old fortress-like temple perched on a ridge above Thimphu, offering fascinating view of the valley. Late afternoon, visit Trashichhoedzong, “fortress of the glorious religion”. This is the center of government and religion, site of monarch’s throne room and seat of Je Khenpo or Chief Abbot. Built in 1641 by the political and religious unifier of Bhutan, Zhabdrung Ngawang Namgyal, it was reconstructed in 1960s in traditional Bhutanese manner, without nails or architectural plans. Also Evening, visit the government-run Handicrafts Emporium and local crafts shops, to browse through example of Bhutan’s fine traditional arts. Here you can buy hand-woven textiles, thangkha paintings, masks, ceramics, slate and wood carvings, jewelry, interesting items made from local materials. Overnight at the hotel in Thimphu.

After breakfast, drive to Gangtey across Dochu-la pass (3,088m/ 10,130 ft) stopping briefly here to take in the view and admire the chorten, mani wall, and prayer flags which decorate the highest point on the road. If skies are clear, the following peaks can be seen from this pass (left to right): Masagang (7,158m), Tsendagang (6,960m), Terigang (7,060m ), Jejegangphugang (7,158 m ), Kangphugang (7,170 m ), Zongphugang (7, 060 m ), a table mountain that dominates the isolated region of Lunana – finally Gangkar puensum, the highest peak in Bhutan at 7,497m. Afternoon visit Gangtey monastery. Gangtey Goempa (monastery), is perched a top a small hill that rises from the valley floor. The Monastery is surrounded by a large village inhabited mainly by the families of the 140 Gomchens who take care of the Monastery. In winter this families, together with the monastery’s monks, move away to another monastery, a day’s walk to the south. Gangtey, which is now managed by the government, is the only Nyingmapa monastery on the western side of the Black Mountain’s and is also the biggest Nyingmapa monastery in Bhutan. It is directed by Gangtey Tulku, the ninth reincarnation (Tulku) to bear that name. Later explore beautiful Phobjikha valley, lying at an altitude of 2900 m. This is the winter home of rare Black-necked Cranes, an endangers species that migrate from its northern habitats in Tibet and Siberia, each winter. Overnight at the hotel in Gangtey.

The trek leaves the valley at 2830m and leads south, then west through meadows and fields. It then climbs through a mixed forest of juniper, bamboo, rhododendrons and magnolia. The trail is rough and rocky and weaves through trees where pack animals have created deep muddy furrows. After crossing Tsele La (3440m) the trail crosses several meadows, and then descends through forests to Gangak (3020m). It is then a short climb to the camp at Gogona (3100m), a beautiful hilltop site overlooking a long valley. Nearby is Gogona Lhakhang and dozens of poles with white prayer flags fluttering. A 30-minute walk beyond Gogona is a hamlet where you may find homemade arra to buy. The women here weave blankets and speak a different dialect called Bjop-kha (language of the nomads). Overnight camp.

The trail winds gently up above Gogona village, past flocks of sheep and ploughed fields. Climb into a forest of firs, oak, spruce, dwarf rhododendron, miniature azaleas, cypress and juniper. Much of the undergrowth is daphne, the plant that is used for hand-made paper and may be identified by its yellow flowers. Then a long but gradual climbs leads to Shobju La pass (3410m). The trail down from the past is rocky and muddy, weaving through the forest and criss- crossing a small stream. Eventually, at about 3000m, the trail meets a rough trek used by tractors to collect wood from the forest. Follow the road, with a few short cuts through the woods, to a sawmill and woodcutters camp at Dolonaga (2830m). Still heading down, the trail overlooks the broad Khothangkha valley and eventually reaches a clearing, Chorten Karpo, where there are four Chortens dedicated to the four Je Khenpos who came from this area. Three of the Chortens are square, in Bhutanese style, and the fourth is Nepali style. The best camp is in this clearing at 2790m, beside a forest of a large blue pines overlooking the valley and the village of Khothangkha, comprising about 60 rustic houses. Overnight camp.

A short, steep climb along a well-known path takes you to Tashi La (2800m). This is the upper terminus of the cable car” that transports wood down to Chhuzomsa, 1300m below. The walk down is through a beautiful forest, with the undergrowth changing from rhododendrons and magnolia to ferns and dwarf bamboo. This stretch of trail is one of the finest bird-watching areas in Bhutan. Among the species found here are laughing thrush, shrike, magpie and woodpecker. The trail then plunges down past steep terraced wheat fields to a cluster of houses at Whachay. The trail eventually meets the road near Tikke Zampa at 1500m. End of trek and then visit Wangduephodrang Dzong, founded by Zhabdrung Ngawang Namgayl in 1638. It is located on top of a high ridge overlooking a river junction. The Dzong stands majestically on a spur and commands an impressive view over both north-south and east-west roads. Evening visit Punakha Dzong, also known as ‘Palace of Happiness’. It is a massive structure at the junction of two rivers and was built by Zhabdrung Ngawang Namgyal in 1637. Punakha Dzong is the most beautiful and well-known fortress connected with Bhutan’s historical traditions. Overnight at the hotel in Punakha.

Morning drive to Paro en route visiting Simtokha Dzong, oldest Dzong in the country built in 1627 by Zhabdrung Ngawang Namgyal. It now houses the Institute of Language and Cultural studies. Arrive Paro, a beautiful valley, rich in culture, scenic beauty and abound in myths and legends. Afternoon visit Ta Dzong built in 1951, was once the watch tower for the defense of Rinpung Dzong during inter-valley wars of the 17th century. It was re-established as the National Museum in 1967 and has been rated among the best natural history museums in Asia. Then walk down the trail to visit Rinpung Dzong, meaning ‘Fortress on a Heap of Jewels’, was built in 1646 by Zhabdrung Ngawang Namgyal mainly for defense purpose against frequent incursions. Today, it houses the administrative offices which includes the legislative, executive, judicial and religious centre for the people of Paro. Overnight at the hotel in Paro.

Morning excursion to Taktsang Lhakhang popularly known as Tiger’s Nest (approx 5 hour walk). It is one of the most famous of Bhutan’s monasteries, perched on the side of a cliff 900m above the Paro valley floor. It is said that Guru Rinpoche arrived here on the back of a tigress and meditated at this monastery and hence it is called ‘Tiger’s Nest’. This site has been recognized as a most sacred place and visited by Shabdrung Ngawang Namgyal in 1646 and now visited by all Bhutanese at least once in their lifetime. On 19 April, 1998, a fire severely damaged the main structure of building but now this Bhutanese jewel has been restored to its original splendour. Afternoon drive to Drukgyel Dzong, a ruined fortress where Bhutanese warriors fought Tibetan invaders centuries ago. The snowy dome of sacred Chomolhari, “mountain of goddess” can be seen in all her glory from the approach road to the Dzong. Along the way, visit the 7th century Kyichu Lhakhang, one of the 108 temples built in the Himalayas by Tibetan King, Songtsen Gampo. The building of this temple marks the introduction of Buddhism in Bhutan. Overnight at the hotel in Paro.

After breakfast, transfer to the airport for flight to onward destination. 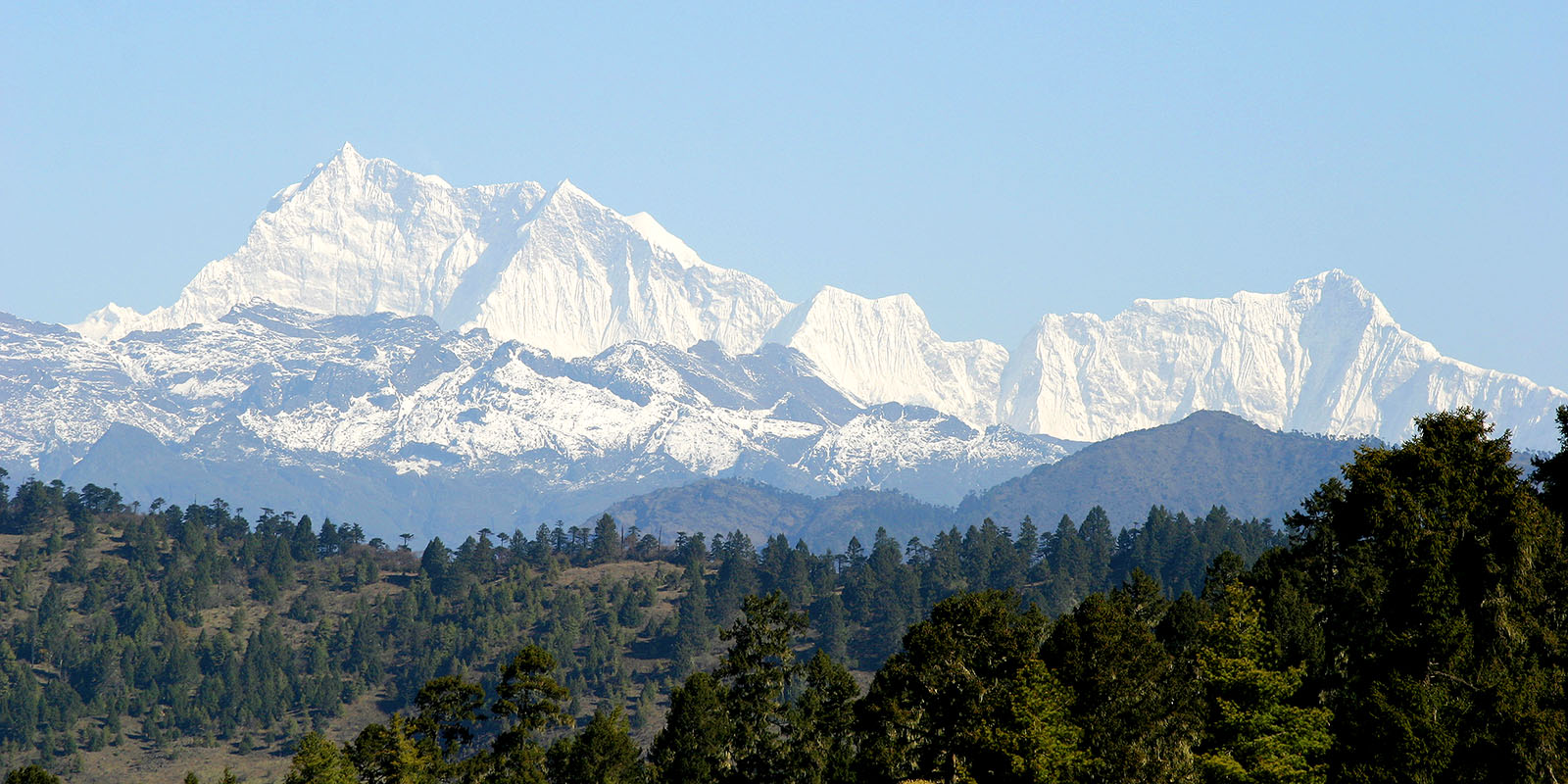 This trek route falls under old expedition route to Mt. Gangkhar Puensum. The trek is known for its ... 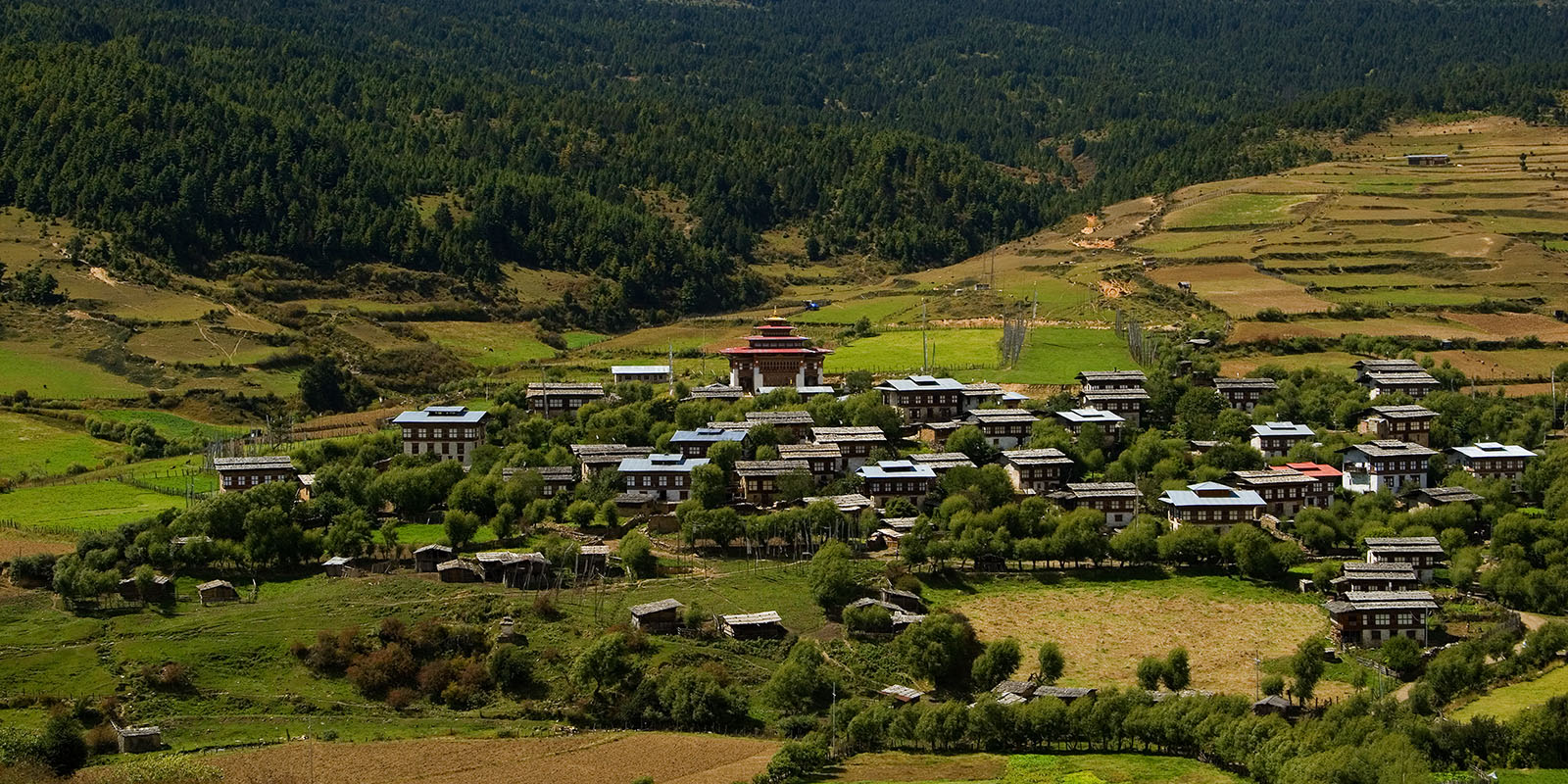 The lovely Bumthang valley is the religious heartland of the nation and home to some of its oldest B... 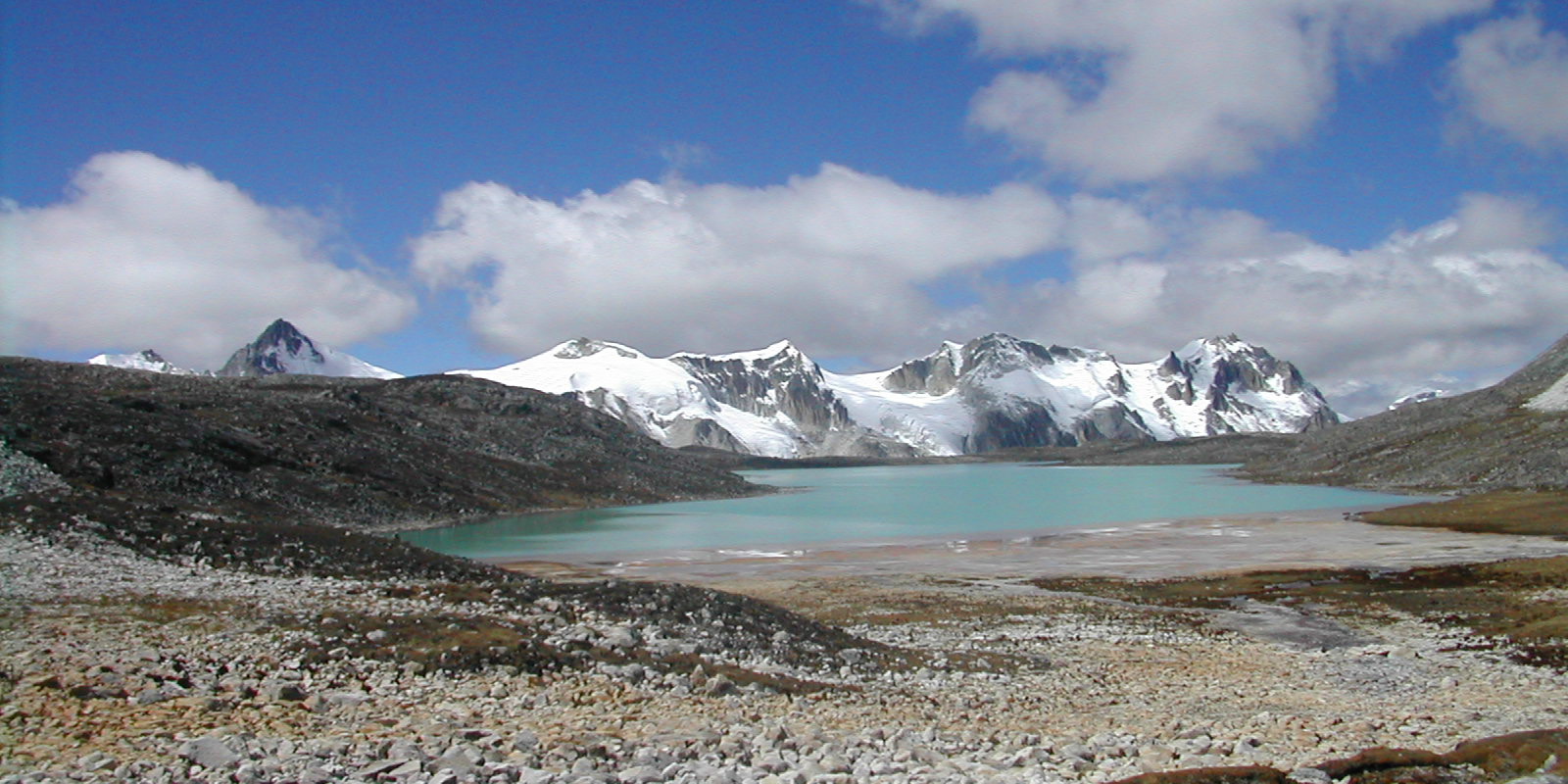 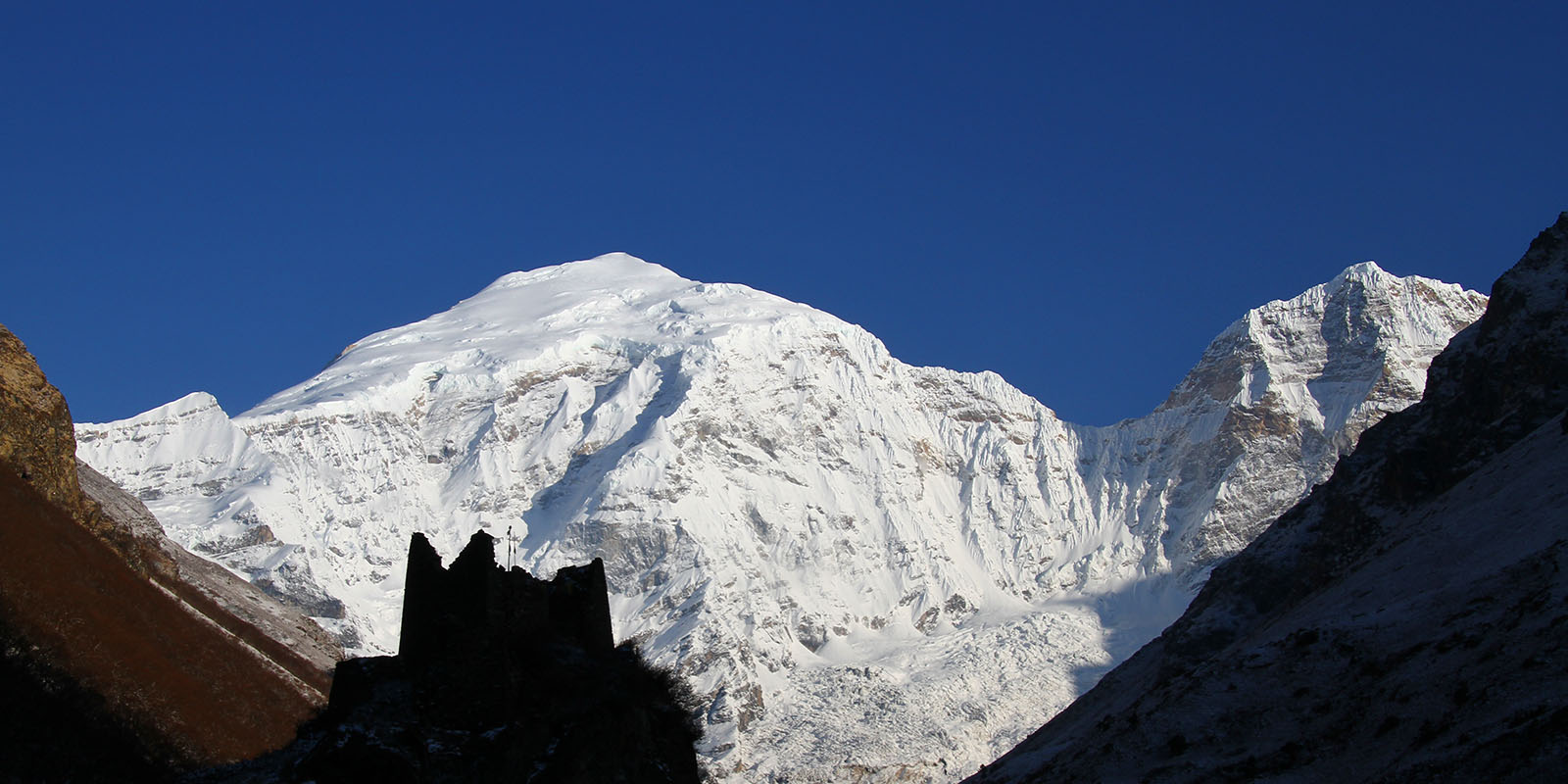